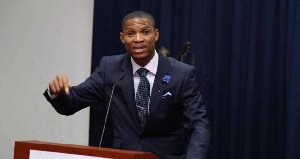 Lawyer Francis Xavier Sosu, the parliamentary candidate for the opposition National Democratic Congress (NDC) in Madina has suggested Ghanaian youth are now looking for transformational leaders and not transactional leaders.

Speaking in a virtual conversation organized by the Institute for Liberty and Policy Innovation (ILAPI) on the theme, “Youth in Politics for Economic Prosperity” the human rights lawyer disclosed how he was advised by a Seymour citizen to use the money to influence the voters so he could be voted for.

Lawyer Sosu said when he first dedicated to launching his bid to represent the people of Madina, he decided to set a centre for poverty alleviation and the Zongo development platform, but some elderly persons asked him to stop wasting his time with people at Madina Zongo when he could rather save the money and come back and share the money during the primaries so he could easily win.

But the lawyer said he ignored these statements and told them that he would not engage in such political because it was unhealthy.

According to him, if that was the definition of politics then he was not ready to engage in the politics in Ghana.

He said he was coming with an ideology to serve and that ideology worked for him in the party’s recent primaries which saw him win to represent the NDC as a parliamentary candidate.

Lawyer Sosu disclosed he visibly saw people who used money to influence people which he failed to do.

He told host Ebenezer De Gaulle that Ghanaians are today looking for leaders who are competent, dedicated, and transformational.

To him, the era where people use money to buy votes should be discouraged so only transformational leaders who are ready to serve get the opportunity to lead the country and the people.

On his part, the parliamentary candidate for the Liberal Party of Ghana in the Bunkurugu constituency Dimongso Kafari Benjamin slammed both the NDC and NPP for failing his constituents.

He said political leaders we’ve had over the years only capitalize on the poverty of his people to win power but ignores them when they get the nod.

Politicians he argued must serve the interest of the people and not their selfish interest.

He wants to get the nod to represent his people and serve them and not amass wealth for himself.

Politicians he said must be accountable to the people who elected them.

He also advised persons in the civil society to groups and NGOs to join politics because they are far superior when it comes to development issues than politicians.

Saweetie clears the air after her viral Birkin bag comment

How the IMF and United Nations assessed Akufo-Addo’s performance