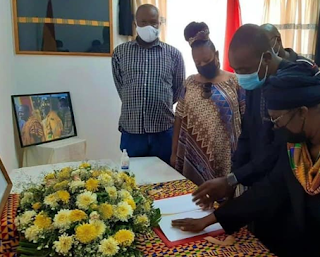 OPPOSITION MDC Alliance leader Nelson Chamisa yesterday
said the military should stay out of politics and allow civilians to define
their destiny without fear of the bullet.

In an interview after signing the book of condolences at
the Ghanaian embassy following the death of former military boss and
ex-President of the west African country, Jerry Rawlings, this week, Chamisa
said Zimbabwe, particularly the junta, had a lot to learn from the late
Ghanaian leader.

Rawlings led a military takeover of the country on two
occasions, first in 1979 and 1981, but went on to oversee Ghana’s transition to
multi-party democracy before stepping down in 2001.

“He teaches us a very important lesson particularly in
Zimbabwe that it is important for the military to play a role that is
progressive and defending civilian authority and not replace civilian
authority,” Chamisa said.

“The fact that he was able to allow for a smooth
handover-takeover and having allowed people to vote, we salute him and we hope
that in Zimbabwe, we are not going to continue to see the replacement of the
ballot by the bullet or the replacement of the voice of the people in villages
and in communities by the sound of the gun.”

“Let it be about the people, about the civilians defining
who they want to govern them and not the military,” he said.

Zimbabwe’s politics has been dominated by the military
since 2002 when the country’s top military bosses declared that  they would not recognise a leader without
liberation war credentials.

The army also played a key role in removing the late former
President Robert Mugabe from power via a military coup in November 2017, before
fatally shooting six civilian protesters soon after the 2018 elections.

Added Chamisa: “We stand in solidarity with the people of
Ghana and the President of Ghana on the untimely loss of a giant in Africa.”

“The first thing that we celebrate as we remember him
(Rawlings) is his ability to be an answer to repression.

“Of course, it was a military response but people had
suffered and what he did most fundamentally was to be able to hand over
authority and power to civilian establishment and that is the most important
thing that he did.

“Most importantly, he managed to set some of the institutional
markers to issues of handover-takeover. When he came in, he was the one who
introduced the issue of having a definite day for handover, so on January 7,
there has to be handover-takeover in Ghana, but a month before that, there has
to be an election.”

2020: Kick out Akufo-Addo, not credible to lead Ghana again

Electricity remains cheaper and reliable under my watch

Viral: Adorable Baby Cant Stop Laughing While Eating Cream; The Video Will Leave You In Splits

Full text: Amidu tackles response of presidency to his letter of resignation from Office of Special Prosecutor

Charting a course correction in our politics – The Boston Globe