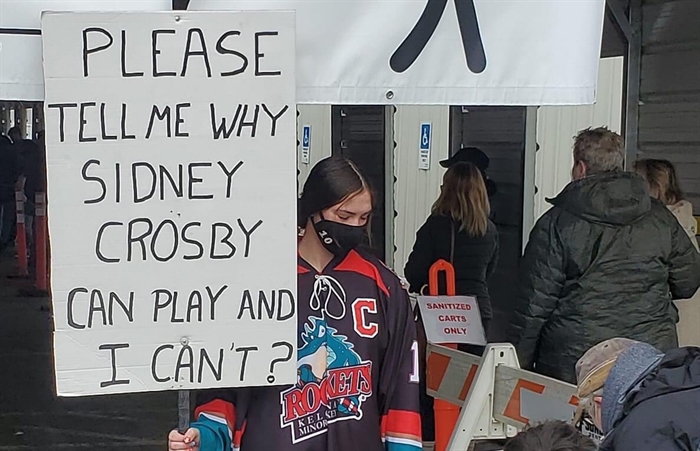 Cassidy Hunt stood outside of Costco in Kelowna Jan. 9, protesting the restrictions on her hockey team around playing games.


A Kelowna hockey player is feeling overwhelmed after a picture that was taken of her protesting COVID-19 restrictions on her hockey team went viral.


Cassidy Bank, 14, stood with a “Please tell me why Sidney Crosby can play and I can’t?” sign attached to a hockey stick outside of various locations around the city this past weekend.


Cassidy, who plays centre with the Peewee Tier 1 Rockets, can only practice with her teammates, which are from other schools, but can’t play games.


A photo was taken of her at Costco, unbeknownst to her at the time, and posted on Facebook and Twitter, where it went viral. Since then, the Twitter post has gathered more than 7,000 likes and 300 comments and media outlets have been reaching out to interview Bank.

Cool update, I’ve been in touch with the girl from the photo and she is an amazing kid. She has been doing media interviews and big things are happening all because she was brave enough to stand up in a respectful way. #bcpoli #hockey #costco https://t.co/AO1mTXpMlP
— Jacki (@okanaganjacki) January 13, 2021


“It’s really overwhelming, I normally don’t get this much attention,” she said.


The Rutland Senior Secondary student came up with the sign idea herself, and at first, her father Sheldon Bank disagreed with it.


“He finally said yes, and I said ‘I need to make posters,’” Cassidy said.


At the downtown Starbucks, “I got way more signatures,” she said, adding that the signatures filled up three-quarters of the board.


While Cassidy doesn’t have a problem with NHL season going ahead, “the NHL got to start and have their season so why can’t I have my season?” she said.


Jacki Wlodarczyk, who originally posted the image on Twitter after a friend posted it from Facebook, said she had no expectation on how the photo would be received from her online audience.


“When I saw the photo, I thought it was a unique and impressive way for a young girl to use her voice. She was respecting the rules, picked a good location and had a valid point, I thought that deserved to be shared. I was shocked when my phone started blowing up,” she said.


“I have a son the same age that plays football and it’s been such a challenging year to navigate as a parent. I’m very proud of this young girl for being so brave.”


During Cassidy’s protest, she also donned her number 10 hockey jersey, which is special to her and her family because it’s a number shared by her cousin Adam Herold, who was killed in the Humboldt Broncos bus crash a few years ago. He was a pick-up for the team and the youngest person to die in the accident that killed 16 people.


Sheldon said he grew up with Herold’s mother, and although Cassidy didn’t know Herold well, they were able to visit with each other the last time Herold was in the Central Okanagan.


“They both wore number 10s, they both were the captains on the team and they actually look pretty similar and they said it was amazing how her game and his game were exactly the same,” Sheldon said. “He liked to get rough in front of the net, he liked to push, he always talking on the ice, he was a huge leader.”


She always has a number 10 jersey, no matter the team as a way to preserve his memory, Sheldon said.


“Just the thought of how good he was, and how determined he was, and just that he lost what he could do most, it really affected me and made me think ‘what if that was me?’ So it made me decide that I was going to help him and now he can play with me,” Cassidy said. “He’d be so pumped (to know that his) name is on the back of my stick.”


While she has received some negative comments online in reaction to her stance, it didn’t change how badly she wants to play a game, she said.


With all the media attention, “it shows me that if I do stick up for myself, I do speak out loud, it will do something… but the worst thing is, I am glued to my screen now and I can’t stop looking at my phone,” Cassidy said.


“(When I play hockey) it just all comes from the heart. It’s such a great sport,” she said, adding that she’s highly competitive and loves to scrap in front of the net.


Cassidy hopes to get a full scholarship and wants to eventually compete in the Olympics with Team Canada. She looks up to Hayley Wickenheiser, who was the first woman to play full-time professional hockey other than a goalie. Her NHL team is the Ottawa Senators.


While the attention has been immense: “I would never take it back, I’ve come so far and I’ve worked hard to get where I’m at now,” Cassidy said.


“We’re waiting for (a call) from Sidney Crosby saying ‘hey, why are you picking on me?’” Sheldon said.


To contact a reporter for this story, email Carli Berry or call 250-864-7494 or email the editor. You can also submit photos, videos or news tips to the newsroom and be entered to win a monthly prize draw.


We welcome your comments and opinions on our stories but play nice. We won’t censor or delete comments unless they contain off-topic statements or links, unnecessary vulgarity, false facts, spam or obviously fake profiles. If you have any concerns about what you see in comments, email the editor in the link above.

The Tribe invites you to Step for Safety in Accra - Ghana 10 Nov 2018.-ghanatoday.net

No lockdown for politics | The Star