Gov.-Gen. Julie Payette and her secretary, Assunta di Lorenzo, are resigning after an outside workplace review of Rideau Hall found that the pair presided over a toxic work environment.

Last year, an independent consulting firm was hired by the Privy Council Office (PCO) to review reports that Payette was responsible for workplace harassment at Rideau Hall.

Sources who were briefed on the consulting firm’s report told CBC News that its conclusions were damning.

LeBlanc said Payette indicated her intention to resign during a meeting with Prime Minister Justin Trudeau last night, where they discussed the report’s contents.

In a media statement announcing her departure, Payette apologized for what she called the “tensions” at Rideau Hall in recent months, saying that everyone has “a right to a healthy and safe work environment.”

“While no formal complaints or official grievances were made during my tenure, which would have immediately triggered a detailed investigation as prescribed by law and the collective agreements in place, I still take these allegations very seriously,” she said in the statement.

“We all experience things differently, but we should always strive to do better and be attentive to one another’s perceptions.” The Privy Council president spoke with the CBC’s Vassy Kapelos on Power and Politics Thursday. 2:20

Payette said her resignation comes at a good time because her father is in poor health and her family needs her help.

“Every employee in the Government of Canada has the right to work in a safe and healthy environment, and we will always take this very seriously,” Trudeau said in a statement. “Today’s announcement provides an opportunity for new leadership at Rideau Hall to address the workplace concerns raised by employees during the review.”

Chief Justice of the Supreme Court of Canada Richard Wagner will fulfil the duties of the Governor General on an interim basis. In a short statement, Buckingham Palace said “the Queen has been kept informed of developments.”

Payette tweeted two days after that story aired that she was “deeply concerned about the media reports” and she “takes harassment and workplace issues very seriously … I am in full agreement and welcome the independent review.”

As of Jan. 5, Rideau Hall had spent more than $150,000 in public funds on legal representation in response to the toxic workplace allegations, and had hired a former Supreme Court justice to represent Payette and Blakes law firm for the institution itself.

That sum is larger than the original value of the federal contract that hired Quintet Consulting to conduct the review. The private firm was hired on an $88,325 contract in Sept. 2020.

Sources have also told CBC that Secretary to the Governor General Assunta Di Lorenzo, who has also been accused of harassing employees, recently hired Marie Henein’s firm to represent her.

Henein represented ex-Vice Admiral Mark Norman, the military’s former second-in-command, during his trial for breach of trust. Federal prosecutors stayed that charge. It’s not clear if Henein or another lawyer at her firm is personally representing Di Lorenzo.

The Bloc Québécois issued a statement calling for the immediate release of the Rideau Hall workplace review and said the position of Governor General has no place in a democracy.

LeBlanc said his department has already received — and will comply with — access to information requests for the report. But he added that federal privacy law limits what can be disclosed.

“The government is not in a position … to necessarily release all the details of the report,” LeBlanc said. “We will clearly comply with the access to information legislation and the appropriate version will be made public as soon as we can.”

Payette joins a very short list of governors general who have left the post early — but she is the first to do so mired in controversy.

Lord Alexander left for England a month before Vincent Massey was sworn in as his replacement in 1952. John Buchan, also known as Lord Tweedsmuir, and Georges Vanier both died while serving, in 1940 and 1967, respectively. In those cases, the Supreme Court chief justice of the day stepped in to fill the role temporarily.

Romeo LeBlanc, Dominic’s father, stepped down in 1999 before the end of his term due to health issues. The office was not left vacant; LeBlanc continued until Adrienne Clarkson was ready to succeed him.

Governors general have resigned under pressure — and have been asked to resign by prime ministers — in Commonwealth countries in the past. In 2003, Australian Gov. Gen. Peter Hollingworth resigned after controversy erupted over the way he had handled sexual abuse claims while he was archbishop of Brisbane. 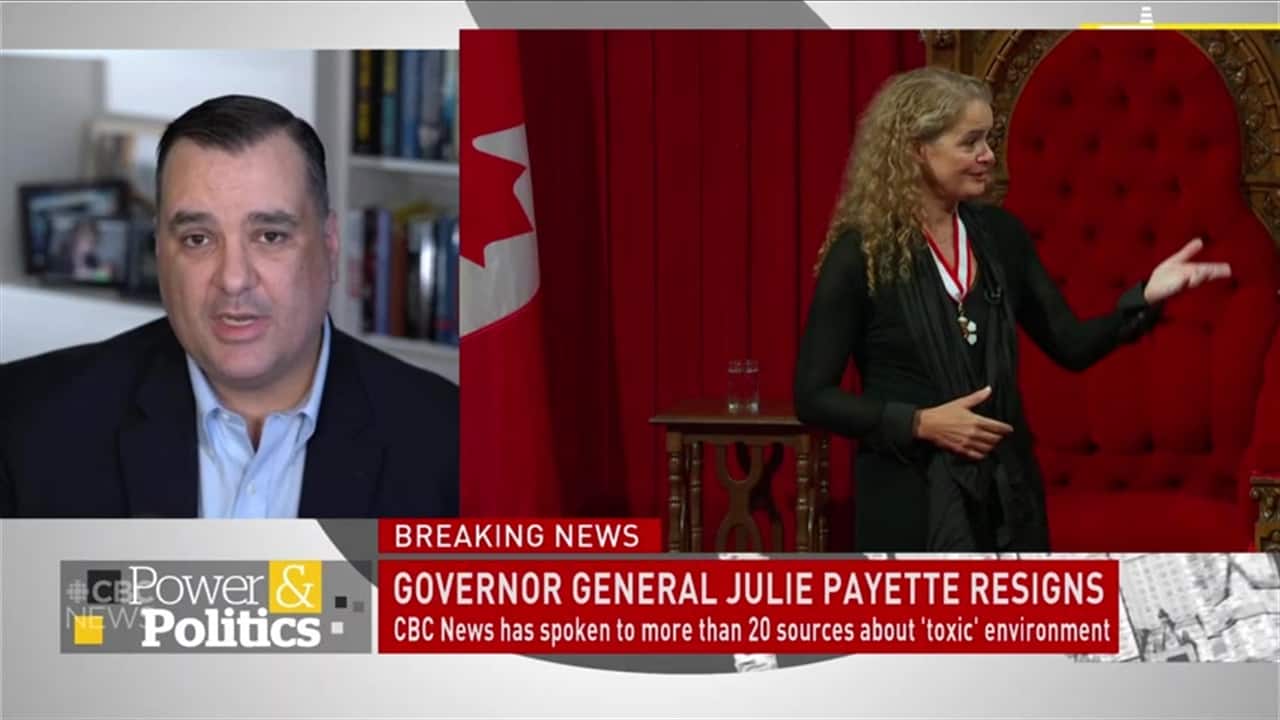 James Moore was the heritage minister in the Conservative government of Stephen Harper. 1:48

Conservative Leader Erin O’Toole released a statement calling on the Liberal government to consult the other parties before choosing Payette’s permanent replacement.

“The Governor General is the Commander in Chief of our Armed Forces and has an important constitutional role,” O’Toole said. “Considering the problems with his last appointment and the minority Parliament, the Prime Minister should consult opposition parties and re-establish the Vice-Regal Appointments Committee.”

That committee was created by the Harper government in 2012 to identify a list of possible candidates for viceregal offices, including the Governor General, through a non-partisan consultation process. It was later disbanded and was dormant in 2017.

LeBlanc committed the Liberal government to a “robust and thorough and complete” vetting process when choosing Payette’s successor.

In a statement, Robert Finch, chairman of the Monarchist League of Canada, called media reports about Payette’s behaviour “regrettable.” He expressed hope that her resignation will usher in a new chapter at Rideau Hall — one defined by “loyalty, dignity, and respect.”

“It is important to remember that the Governor General represents our admired head of state, the Queen,” said Finch. “If future viceregals aspire to perform their roles with the grace, dedication, and duty as our Sovereign has during almost 70 years, they will excel.”

I can also be a President because it's not about intellect, it's about sod cutting

I can also be a President because it's not about intellect, it's about sod cutting

Alienation can be exploited by both ends of political spectrum

Minimum wage amendment defeated in Senate, with Democrats against it

The JM swag will live on!