The Secret Life of Second-Hand Clothing 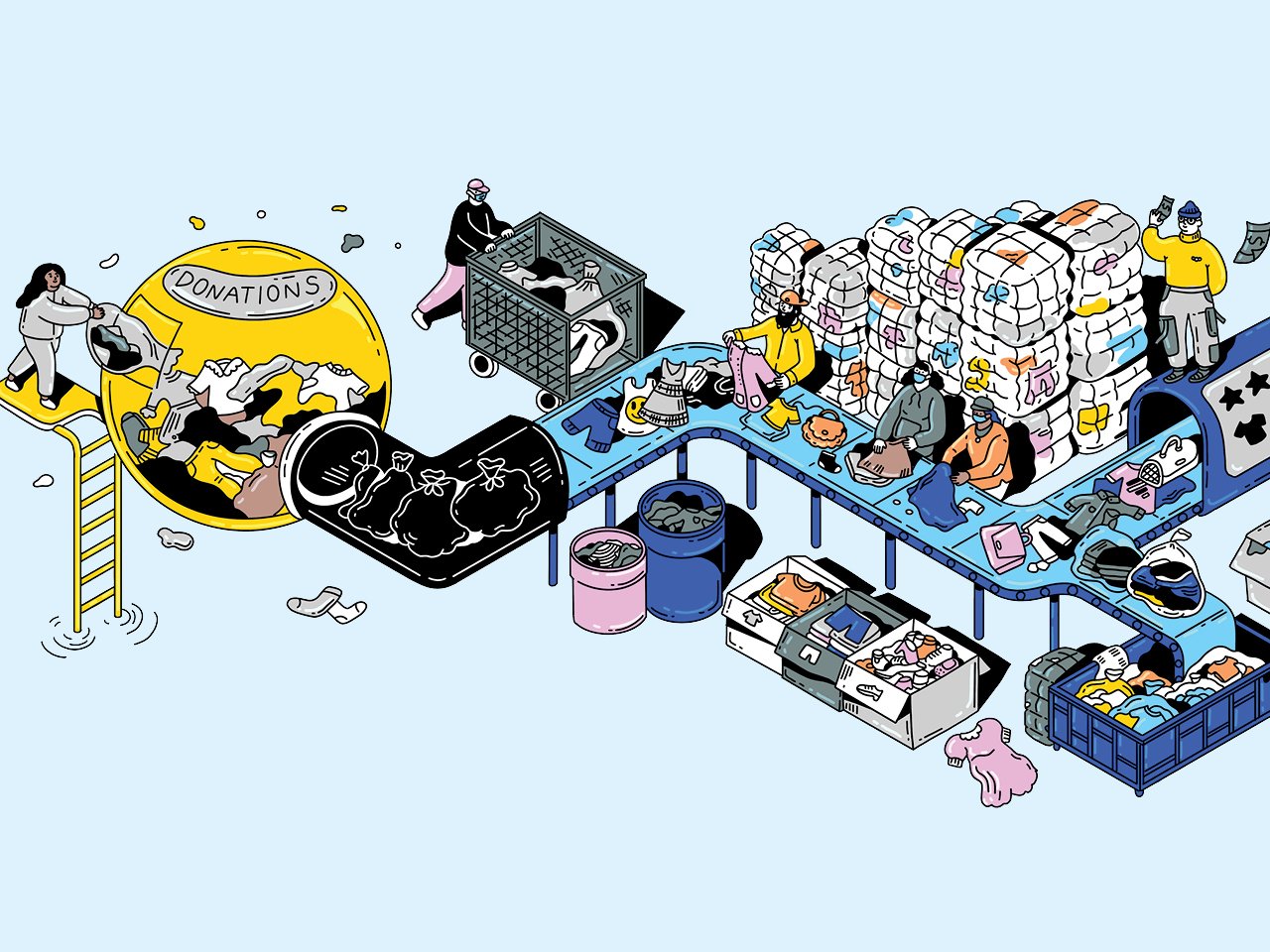 One Thursday a month, during normal times, Whitney McMeekin wakes up at the crack of dawn and puts on her comfiest clothes. She then drives 90 minutes across the Greater Toronto Area (GTA) to a warehouse in Scarborough, Ont., where mountains of second-​hand clothing—sourced from donation bins and charity stores across the eastern seaboard—are dumped onto conveyor belts that span the building, creating rivers of blouses, trousers, blazers, leather belts and shoes. Armed with garbage bags, she sorts through massive bins of clothing, looking for fun, colourful, truly vintage pieces in good condition. “It’s a real labour of love,” McMeekin says. By the end of the morning, she usually heads home with at least four bags filled to the brims.

The atmosphere couldn’t be further from that of her charming pink shop, Girl on the Wing, located in downtown Hamilton, Ont. “I have a love affair with [vintage],” says McMeekin, who collects historical clothing herself (she owns pieces from as far back as the 1920s) and opened Girl on the Wing in 2013.

The warehouse where McMeekin sources her vintage clothing is one of many similar operations spread across the GTA, which is widely considered to be one of the biggest hubs for textile recycling in North America. Colloquially called rag houses, they are the suppliers of the vintage world. Many dealers fiercely guard the locations of their favourites, not wanting to spill the secret of how they score such precious finds. But these facilities are also part of a massive system of textile trading that stretches across the globe—and big players in the lesser-known life of second-hand clothing.

Society has dealt in used clothes ever since humans first decided it was a tad more comfortable to wrap ourselves in furs and fabrics. “Good-quality second-hand clothes were prized, even being valuable enough to have served as an alternative to currency [pre-industrialization],” writes Andrew Brooks in his 2015 book, Clothing Poverty: The Hidden World of Fast Fashion and Second-Hand Clothes. For most of our history, people outside of the ruling class owned very few clothes, which were prohibitively costly. Often, if you wanted a nice new frock without having to make it, you had to barter or buy a used one, and then repair or alter it.

Eventually, rapid industrialization in Europe and North America led to the mass production of clothing. Cut to a postwar economic boom in the 1950s, and fashionable garb suddenly became much more accessible to a wider swath of the population. And as they began following trends, people wanted to get rid of their old clothes, often donating them to charities, who needed help sorting the material. Enter the rag house.

“Most Americans are thoroughly convinced there is another person in their direct vicinity who truly needs and wants all our unwanted clothes,” writes Elizabeth L. Cline, the author of 2012’s Overdressed: The Shockingly High Cost of Cheap Fashion. The truth is, as Cline makes clear, there are simply too many donations to be redistributed locally. (According to a 2018 CBC Marketplace investigation, a Salvation Army sorting centre can take in as much as 90 tons of clothing a week.) Selling donated clothing to rag houses generates revenue for the charities that collect it. There, these pieces enter a global network of textile importing and exporting.

In the bigger rag houses, bales of used clothing are emptied onto conveyor belts. Pickers employed by the rag house unpack the bales along a production line, each pulling a different category of item, such as T-shirts, dresses or purses. Sorted clothes are then graded. High-quality items will likely make their way to vintage stores across North America, Europe and Japan. The next level down will be purchased by international firms and sold in local markets; Africa has traditionally been one of the prime places where this clothing is sent, but much is also shipped to eastern Europe and Southeast Asia.

“Today, we are sorting around 150,000 to 180,000 pounds a day, but a couple of years back . . . we were sorting half a million pounds daily,” says Darshan Sahsi, owner and managing director of Canam International. He employs 1,500 people between his textile-recycling plants in British Columbia and India, which source second-hand clothes from Salvation Army, Goodwill, Value Village and many more. “You name it, and we are buying from [them].” (Volume is currently down, he notes, because COVID-related charity-store closures have limited donations.)

There are approximately 40 rag houses in the GTA, though that number fluctuates, as does the size and quality of the operations. Josh Hicke, who owns Vintage TO in Toronto—which specializes in collectible men’s apparel and cultural nostalgia from the 1970s and 1990s—says his current GTA supplier is quite small. “But there’s some that are massive and have 20 [conveyor belt] lines going at a time,” he says.

The picking itself is incredibly physically taxing. “My thumbs twitch after, because I [used] my hands to pull heavy clothing for such an extended period of time,” says McMeekin. Some pickers wore masks even before the pandemic to help deal with the dirt and dust that collects on old clothes. Despite the conditions, it’s where vintage sellers often find the best stock—and it beats driving to multiple thrift stores to sort through already-picked-over clothing.

I spoke to six vintage sellers for this piece, and all refused to disclose which rag houses they use. Rumours abound of people being blindfolded and driven to warehouses on the outskirts of Toronto to keep them from revealing the precise locations of rag houses. “People are very secretive about it because you just don’t want a hundred kids showing up at your rag house trying to offer 50 cents more a pound to compete with you,” says Jesse Heifetz, the co-owner of F as in Frank, which has vintage-clothing warehouses and storefront operations that sell a large array of women’s and men’s vintage clothing in Vancouver and Toronto.

And this is big business. The proliferation of sellers who operate through social media, and vintage-resale apps like Depop and Poshmark, has helped push an explosion in the resale market; the only requirements for entry are a good eye and a good phone to take photos of your finds.

Sam Kauffman got into selling vintage by chance. “I was literally broke, driving Uber,” says Kauffman, who at the time turned to thrift stores to hunt down a Kappa track suit for himself—and then realized he was good at it. Within a year and a half, he opened Final Touch Vintage in Toronto. “Once I learned about this community, and how much people truly care about this product and the history behind some of the pieces of clothing, I was just blown away.”

The global resale-clothing market is expected to reach US$64 billion in sales by 2024, according to a report by online resale platform ThredUp. Last year, a T-shirt from Disney’s 1992 Aladdin movie sold for a mind-boggling US$6,000 in a virtual auction. 1990s nostalgia is having a major moment, and there are collectors who will pay top dollar for vintage tees (it’s not uncommon for unique pieces of Harley-Davidson apparel to sell overseas for US$1,000 or more). But that’s not the bread and butter for most sellers, who make more money off consistent sales in the $20 to $50 range.

The demand for vintage is so high that even retail chains are getting into the game. Urban Outfitters sells second-hand alongside new clothing; Salim Manji, the owner of Manji Trading in Toronto, picks mostly for the trendy retailer’s European division. Manji sent me a quick video of his own vintage warehouse—stocked with items he sources from rag houses and sells to other vintage dealers—and it gave me a sense of how much clothing and textiles are being processed, and what kind of scores await the patient. What appears to be a Hudson’s Bay point blanket, which retails for anywhere from $400 to $600 on Etsy, was lying on the ground. A brown, black and white Pucci-like print dress hung on a rack with higher-end items. In bins labelled for shipment overseas, vintage Levi’s are sorted by style and size.

About five years ago, F as in Frank’s Heifetz, responding to a gap in the market for women’s streetwear, founded Frankie Collective, which upcycles vintage goods—even damaged ones—into stylish reworked pieces. Since then, Frankie Collective has collaborated with big brands like Tommy Hilfiger and Reebok, reimagining secondhand items. “[Before,] if you got a great sweatshirt but it had a small hole in it or a small stain, it was going to landfill,” he says. But now, his upcycling business directly addresses that.

There is a pecking order at the rag houses. David Cho, whose family owns Vintage Depot—which operates two high-quality, mom-and-pop thrift stores in Toronto—buys 300 to 500 pounds of clothing a day. (Cho also co-founded Final Touch with Kauffman.) He’s allowed to stand at the top of the conveyor belts at the rag houses he frequents, intercepting top picks before they make their way down to smaller-scale buyers. By comparison, Hicke—who typically purchases 100 to 150 pounds at a time—is only allowed to pick one day a week. “Some owners won’t allow the smaller buyers in because it’s just a [logistical] headache,” says Cho. “To them, that’s literally Tim Hortons coffee money.”

Sahsi, from Canam International, estimates that only two to five percent of his revenue is generated by vintage sales. The rest comes from large-scale export. In 2020, the textile export trade in Canada (which includes both used clothing and used textiles) was valued at $135 million, and most items went to Ghana, Pakistan and Kenya.

There is much criticism of this system. When countries in the Global South have been subjected to economic policies that often make them dependent on increased importation of essential goods and services, local clothing manufacturing suffers. “Money previously spent on domestically produced goods was diverted to purchases of imported clothing, and profits flowed out of African economies to commercial exporters and charities,” writes Brooks. Some say this provides jobs, but Brooks notes the opportunities are unequal—not to mention the fact, as Cline points out in her book, not everyone is interested in North Americans’ castoffs. (In 2015, several East African countries agreed to place high tariffs on second-hand clothing imports starting in 2019, though all countries, save Rwanda, later backed out due to pressure from the U.S.) There is still an astounding amount of clothing that will never be resold and will eventually end up in landfills.

Vintage dealers see themselves as performing an act of service. “There’s just so many clothes in the world,” says Hicke. “I’m grateful for every piece I can take.” Almost all the dealers I spoke with had also made a major lifestyle shift: They no longer buy new clothing.

Over the past few years, countless books, articles and documentaries have detailed the socio-​economic and environmental problems with fast fashion and clothing waste, as well as possible solutions. “Clothing should be kept in good condition, able to be worn after us, which means caring for and maintaining it while we own it and cleaning it and repairing it before we donate it or sell it or give it away,” writes Cline. Yet, while retail clothing sales have slumped during the pandemic, chances are you’ve bought at least one new pair of jogging pants in the past year (and donated at least one bag of clothing to your local donation centre, post-closet purge).

Perhaps it’s because we don’t see the end result of this constant buy-and-discard cycle: the mountains of used clothing eventually scattered across the world. “People need to understand the process of what happens to their clothes when they donate them,” says Hicke. “Maybe that’ll make people a little more conscious and think a little harder about a purchase.”